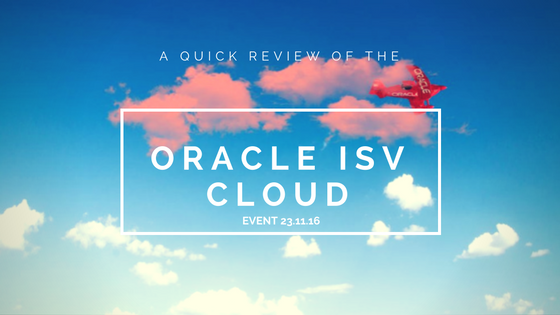 Yesterday evening (23/11) I attended an Oracle event in London aimed at their ISV (Independent Software Vendor) partners and I was expecting to be heralded with a lot of Oracle rhetoric around the growth of their customer base and imminent Cloud domination. However, the focus from the presenters was much more of a candid, real-world and honest view of how partners are using Cloud platforms including the good and the bad.

What was refreshing was the recognition from Oracle that they are behind the curve in providing a Cloud platform with AWS and Azure having stolen a march over the past few years. Oracle described their need to “create the next S-Curve” whereby they’ve saturated their addressable market for database technology and it’s now time to create the new R&D winner within the Cloud space.

Equally apparent was Oracle’s recognition that the decision making within businesses has now moved from the traditional CIO and CTO role to the developers and what was termed the “shadow IT” teams. The development teams and enterprise architects are increasingly the ones calling the shots in terms of upcoming deployments and they are creating complex IT landscapes. This is causing havoc with Oracle’s traditional “top down” selling model as customers become increasingly comfortable with “in life” cloud purchasing.

With this in mind, Oracle seem to be going to great lengths to alter their structure and how they’re communicating with customers; they’ve noticed that they are now at risk of losing market share to much more agile organisations and as such, they’re trying to think more like a start-up and introducing more creative commercial models along with a more flexible offering.

The ISVs present all appeared to share the same opinion that they’re having to evolve into service providers as their customers are now expecting them to deliver an end-to-end SaaS solution which includes SLA and security responsibility, which is a big mind-set shift away from a pure application focus. In addition, customers are expecting rapid deployment capability that gets them live in hours/ days, not weeks. This inevitably creates a skills gap within a number of ISV businesses where they don’t have, nor want to have, the back-end database skills and the cloud devops capability to really get the best out of the platforms. As such, a theme within the night was the importance of working with the right partners to help devise and deliver an effective Cloud strategy.

It wouldn’t be an Oracle event without at least some stats and one interesting view is that 8% of customers currently have a “mature” Cloud strategy. This is expected to increase to 72% within 18 months. Therefore the imminent opportunity is enormous for the ISVs, services partners and Cloud platform providers and it feels like Oracle have woken up to the fact they have to get creative to win over their ISV partners who will ultimately decide on what Cloud platform to deploy on.

In summary, it was refreshing to see a more humble Oracle last night along with the acceptance that their Cloud product needs to be really tuned-in to customer requirements as opposed to a more dogmatic approach. 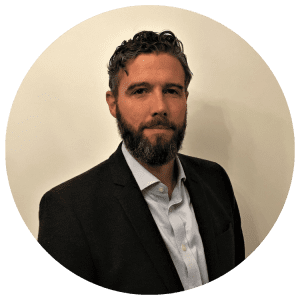 Julian brings over 20 years of experience having started his career in the UK’s Oracle distribution channel in 1997.

He's working hard towards taking over the Database Managed Services world and we think he's doing a pretty good job!

Get to know Julian better here.