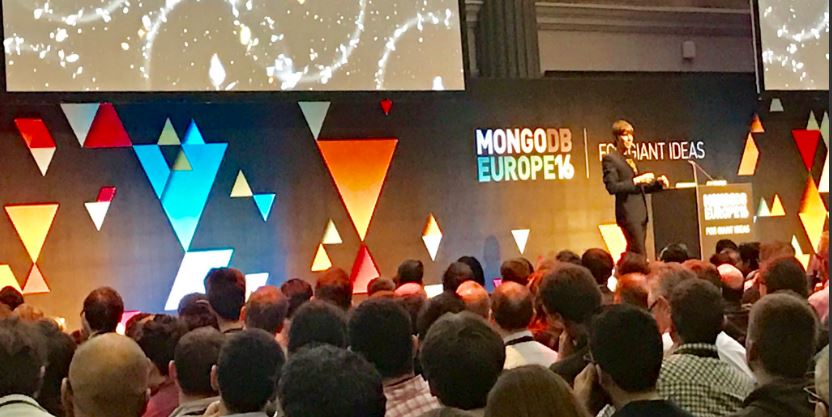 Forget the jokes about “MongoDB is web scale”. Today MongoDB Europe 16 proved Mongo’s scale of appeal by hosting an event in London that was bursting at the seams with over 1,200 attendees. For sure Professor Brian Cox proved a draw but the majority of attendees were still watching founder Eliot Horowitz close at 6pm and the venue was buzzing with a happily captive audience. The development community that has taken MongoDB under its wing continues with a momentum that shows no sign of stopping anytime soon. In terms of community, MongoDB boasts a juggernaut of support that’s the envy of the other NoSQL vendors.

Here are the key takeaways from MongoDB Europe 2016:

The release of version 3.4

The centrepiece of the 3.4 release is Compass (IMO). Compass is a new GUI that really helps to visualise data within MongoDB and it’s a great compliment to Ops Manager. Anything that helps get to the root cause of performance issues quickly is a welcome addition and Compass does exactly that by visually being able to explore query performance, schemas and explain plans at the click of a button.

The other key release in 3.4 is MongoDB Zones which is a timely addition that will help organisations address the new GDPR governance that comes into force in 2018. MongoDB Zones is designed to provide the ability to tag data in geographically distributed environments, ensuring data sovereignty can be retained in region. The feature can also be applied in a alternative use case to allocate data to different storage tiers for example, moving cold data onto cheaper storage dynamically.

Other new features in 3.4 include:

Atlas is MongoDB’s new DBaaS offering that provides a dedicated tenancy on AWS EC2. At the moment it’s only available in a handful of AWS regions as three Availability Zones are required to ensure HA diversity plus a witness site to guard against split brain.

As you’d expect with Mongo there is a slick GUI to allow for the deployment and a level of management abstraction to the user from the underlying environment. Atlas at the moment is tightly integrated with AWS security controls and although Azure and Google are promised in the future it will take a bit of reengineering to get a consistent security approach across all platforms. Once you have deployed on Atlas, customers ideally then peer their own VPC with the Mongo Managed VPC and App Servers connect through a security whitelist via TLS.

Don’t throw your DBA’s in the bin just yet! MongoDB were at lengths to stress they see this role moving up the stack to address security and performance tuning at an index/ query layer.

The day was bought to a close with a quick insight into the roadmap and the future direction of MongoDB. It was very obvious that MongoDB are looking to play to their strengths, one of which is their large developer led community. The roadmap really tries to leverage this relationship, aiming to gain more wallet share from development projects. The roadmap really focused on the below areas:

Atlas Development: Improvements such as a free tier will help to capture early stage projects, whereas a new import service will do the heavy lifting for bigger and more established on-premise environments

End to End Service Orchestration: Service Orientated development is creating applications that under the hood are mix of micro services with APIs and third party services (e.g. Stripe). There is a desire to create an end to end data management capability outside of just MongoDB.

Improved BI Capability: A follow on really from the above point to provide cross service analytics.

Enhanced Distributed Architecture: There were a number of points mentioned such as Multi Document transactions and the ability to guarantee the integrity of writes across a distributed system which points to this being a future development area.

All in all it was a very enjoyable conference with some great presentations.